Boys and the Masks They Live In 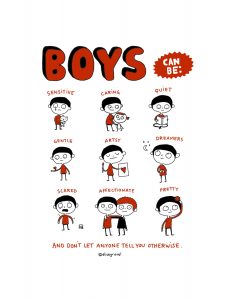 If you haven’t seen Netflix’s The Mask You Live In, you probably should. This documentary is a fascinating, relevant and sobering investigation into the countless (unnecessary) pressures Western culture places on our young boys.

Compared to girls, boys are more likely to:

Additionally, 94% of mass homicides are committed by males. Plenty of girls live in a culture where there is easy access to guns, why don’t girls and women do the shootings? It’s so interesting that “the national conversation almost never mentions gender as a factor when, in fact, it’s the single most important factor… but it’s unspoken. So part of our challenge is to make visible what has been rendered invisible.”

Everyday three or more boys commit suicide; and, for boys, suicide is the third leading cause of death. If we are willing to look closely, “exactly at the age that we begin to hear the emotional language disappear from boys narratives – in the National data, [is] exactly the age that boys begin to have five times the rate of suicide than that of girls.” Dr. Niobe Way

Again, if you haven’t watched it, you really should.